Moai /ˈmoʊ.aɪ/, or Mo‘ai, are monolithic human figures carved by the Rapa Nui people on Easter Island in eastern Polynesia between the years 1250 and 1500 CE. Nearly half are still at Rano Raraku, the main moai quarry, but hundreds were transported from there and set on stone platforms called ahu around the island’s perimeter. Almost all moai have overly large heads three-eighths the size of the whole statue. The moai are chiefly the living faces (aringa ora) of deified ancestors (aringa ora ata tepuna). The statues still gazed inland across their clan lands when Europeans first visited the island, but all of them had fallen by the latter part of the 19th century.

The production and transportation of the more than 900 statues are considered remarkable creative and physical feats. The tallest moai erected, called Paro, was almost 10 metres (33 ft) high and weighed 82 tons; the heaviest erected was a shorter but squatter moai at Ahu Tongariki, weighing 86 tons; and one unfinished sculpture, if completed, would have been approximately 21 metres (69 ft) tall with a weight of about 270 tons. The moai toppled after European contact when islander traditions radically changed.

Moai are carved in relatively flat planes, the faces bearing proud but enigmatic expressions. The human figures would be outlined in the rock wall first, then chipped away until only the image was left. The over-large heads (a three-to-five ratio between the head and the trunk, a sculptural trait that demonstrates the Polynesian belief in the sanctity of the chiefly head) have heavy brows and elongated noses with a distinctive fish-hook-shaped curl of the nostrils. The lips protrude in a thin pout. Like the nose, the ears are elongated and oblong in form. The jaw lines stand out against the truncated neck. The torsos are heavy, and, sometimes, the clavicles are subtly outlined in stone. The arms are carved in bas relief and rest against the body in various positions, hands and long slender fingers resting along the crests of the hips, meeting at the hami (loincloth), with the thumbs sometimes pointing towards the navel. Generally, the anatomical features of the backs are not detailed, but sometimes bear a ring and girdle motif on the buttocks and lower back. Except for one kneeling moai, the statues do not have clearly visible legs.

Though moai are whole-body statues, they are erroneously referred to as “Easter Island heads” in some popular literature. This is partly because of the disproportionate size of most moai heads and partly because, many of the iconic images for the island showing upright moai on the island are the statues on the slopes of Rano Raraku, many of which are buried to their shoulders. Some of the “heads” at Rano Raraku have been excavated and their bodies seen, and observed to have markings that had been protected from erosion by their burial.

All but 53 of the more than 900 moai known to date were carved from tuff (a compressed volcanic ash) from Rano Raraku, where 394 moai and incomplete moai are still visible today. There are also 13 moai carved from basalt, 22 from trachyte and 17 from fragile red scoria. At the end of carving, the builders would rub the statue with pumice.

Archaeologists believe that the statues were a representation of the ancient Polynesians’ ancestors. The moai statues face away from the ocean and towards the villages as if to watch over the people. The exception is the seven Ahu Akivi which face out to sea to help travelers find the island. There is a legend that says there were seven men who waited for their king to arrive. 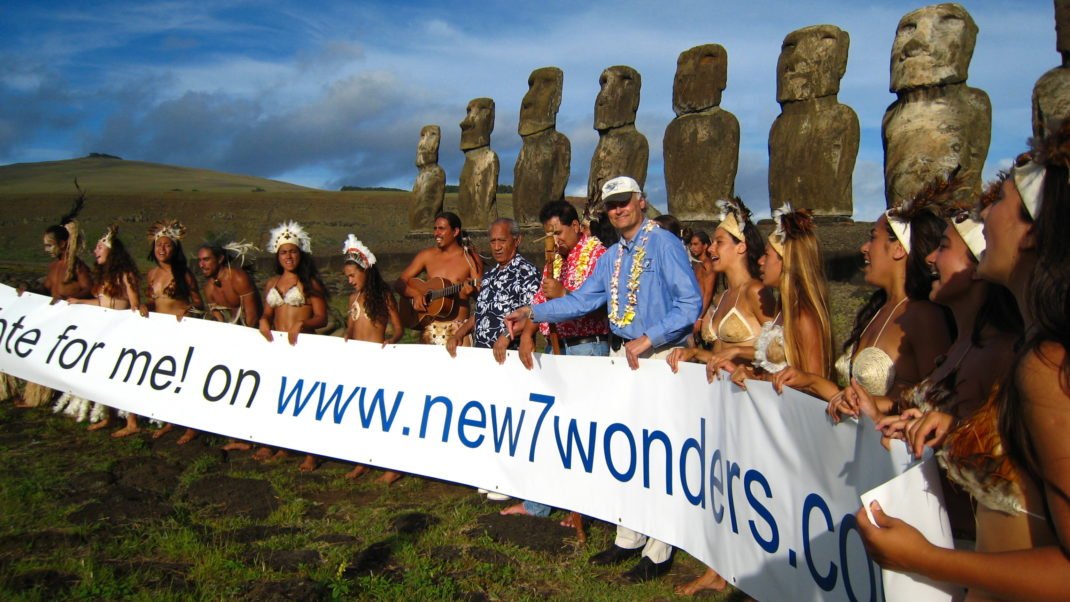